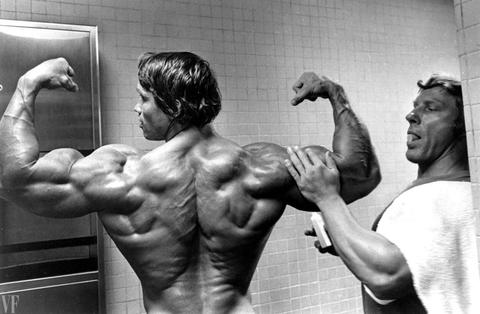 The rear deltoids are something of an afterthought to a lot of gym bros. “Out of sight, out of mind” is something of an unspoken motto for part-time aesthetes who prioritize their mirror muscles.

They might sometimes hit their back, but, of course, chest comes first.

When shoulder day comes around, they often start with a few presses–both dumbbell and barbell–before polishing off the session with half a dozen sets of lateral raises and maybe–maybe–a few reverse flyes.

However, these bros are limiting themselves unnecessarily. A whole world of strength and muscle gains await them if they simply train those neglected rear delts.

Your front delts get more than enough stimulation from presses. I have been of the opinion that it is wholly unnecessary to isolate your front delts. I’ve literally never met anybody whose front delts are a lagging body part in relation to the rest of their body.

And my front deltoids are enormous for a natural lifter.

But while rowing and back exercises indirectly train the rear delts, but failing to do reverse flyes, rear lateral raises, face pulls, and band pull aparts; again, you’re ridding yourself of immense gains from a small muscle.

1: The Rear Deltoid is crucial for 3D/Cannonball Shoulders

You cannot have those spherical deltoids without rear delts, period.

For your deltoids to boast that oft-coveted roundness, the rear delts are perhaps the most important out of the three exterior shoulder muscles to train.

Some place too much emphasis on their side deltoids to get that sick shoulder cap.

But it’s the unsung hero at the back that is responsible for that amazing aesthetic look.

If you forget or run out of steam before hitting them, try training them as your first lifts on your shoulder day. I train my rear delts on all of my upper body days.

And not only will your shoulders look better, and help you attain that V-taper physique, but your shoulder health will improve immensely.

2: It is Fundamental for Your Shoulder Health

We’ve all heard of the magic push to press 2:1 ratio if we’ve been training long enough–and this cannot be truer about stimulating the rear deltoid.

Face pulls and band pull aparts–aside from their inner rotation within the shoulder joint–are an absolute must for any–and I do mean, any–pressing movement.

I once attempted the Smolov Bench Program and the sheer volume of heavy weights with infrequent rest damaged my shoulders.

Throwing in some face pulls on a daily basis thereafter contributed immensely toward my recovery.

Strong and developed rear deltoids will address imbalances that will inevitably arise.

But some imbalances can lead to postural problems, leading us to 3: Rear Deltoid Development Improves Posture

Moreover, many gym bros can cause harmful imbalances and shoulder rounding by pressing too much in their first few years of training.

Some lifters may suffer from both a sedentary lifestyle and poor novice training regimens leaving their shoulders rounded like a gorilla.

Attacking your rear delts is one of the key ways to begin approaching these postural imbalances.

Prioritizing these small muscles can go a long way in creating an illusion of a wide chest, but working as an antagonist to chest/front deltoid-dominant movements that we all love.

4: Your Strength Will Fly Up

My Bench Press and Dips increased beyond my wildest natty dreams through focusing engagement with my rear delts, rhomboids, and lats.

“BuT THe beNCh pREsS iS a FrONt DeLt DoMinANt MovEMenT,” you might say.

While this is partly true, go back and retract your scapula on your major pressing and dip movements, then return to see me.

No need to thank me.

Your pulling movements will increase; your squat and deadlift will become more stable: there’s literally no downside to it.

Except, of course, don’t overtrain your rear delts as they are small muscles. Burn out can leave you susceptible to injuries if you overtrain them.

Have one day of isolation, with 1-2 specific exercises, and throw them in as a finisher/warm-up on 2-3 other sessions at a light, manageable weight.

5: It Will Make You Cooler

Like smoking cigarettes when you’re a teenager, rear delt exercises will make you 25% cooler.

But you will become part of an elite few at the gym that actually trains this criminally neglected muscle.

In total, you shouldn’t be spending more than 15-20 minutes a week, spread across 3-4 sessions, to fully train this small muscle.

For such a short amount of time needed to focus on your rear delts, the reward for putting in the effort is astronomical.