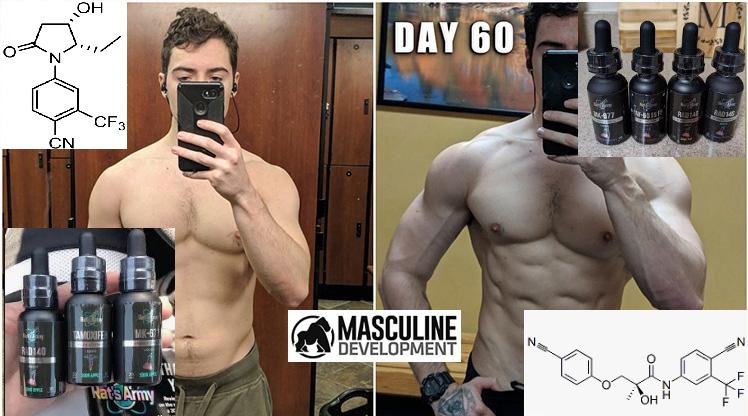 Scientists are experimenting with a new SARM called OPK-88004 which has muscle-building and fat-loss effects, as well as having no impact on the prostate.

For more on SARMs in general, consult our ULTIMATE GUIDE TO SARMs to get started.

OPK-88004 is a novel SARM developed by Transition Therapeutics, which was bought by OKPO in 2016.

Researchers from Brigham and Women’s Hospital in Boston, USA, experimented with 114 men who had their prostate removed after doctors had detected a non-metastatic form of prostate cancer. The researchers divided the men into 4 groups, and gave them a capsule containing 0 [the placebo group], 1, 5 or 15 milligrams of OPK-88004 every day for 12 weeks.

Not to be confused with SERMS, SARMS stand for “selective androgen receptor modulators” and work similarly to steroids by binding to the body’s receptors and recoding DNA to become more efficient — or “tissue selective — at packing on muscle.

The performance enhancing drug (PED) has presented itself as an attractive alternative to androgenic anabolic steroids (AAS) in recent years due to boasting less side effects and its current legal status.

SARMs have significantly risen in popularity for this very reason. And as SARMs are more “tissue-selective” while boasting far less androgenic side effects — hair loss, acne, prostate enlargement, clitoral enlargement, unwanted hair growth, etc. — due to binding to skeletal muscle receptors. SARMs have begun to even overshoot anabolic steroids in some parts of the globe.

Bodybuilders and powerlifters alike run SARMs and even stack them with steroids to yield their desired results. This is because SARMs can yield keepable muscle and strength gains without drastic hormonal shifts.
As AAS are illegal and carry heavy punishments in many countries, SARMs are able to circumvent legal parameters due to its liquid form, thus putting them in a legal grey area.

As a result, SARMS have filled a massive consumer demand for PEDs as lifters strive to attain superhuman physiques.

Another attractive benefit of SARMs are their user-friendly oral consumption. Lifters might be deterred at the prospect of intramuscular injections in pinning certain steroids — as oral-only steroid cycles are mostly ill-advised for their liver toxicity and other side-effects.

CLICK HERE TO BUY SARMS VIA OUR TRUSTED SELLER SWISS CHEMS, WITH AN 11% DISCOUNT

Over the course of the 12 weeks, OPK-88004 increased lean body mass and reduced fat mass. The highest dose of OPP-88004 tested (15 milligrams per day) produced the best results.

The 15 milligram dose of OPK-88004 also seemed to improve performance on the stair climber and leg press (see the table below). The result, however, was not considered to be statistically significant.

OPK-88004 did not increase PSA levels. This means that the SARM did not stimulate the growth of any prostate cancer cells present.

OPK-88004 also had no libido-boosting effects. For this reason, and because the effects of the new SARM on strength and physical performance did not seem to match the lean-mass-gain and fat-loss effects, the researchers are unsure about OPK-88004’s market potential, unless further testing takes place.

“The administration of a SARM in androgen-deficient men who had undergone radical prostatectomy for low-grade organ-confined prostate cancer was safe and not associated with PSA recurrence”, write the researchers.

“The short-term safety data are reassuring and provide the rationale for investigating the efficacy of SARMs, such as the OPK-88004, that were developed for their preferential muscle and bone anabolic effects, among prostate cancer survivors with physical dysfunction, and for developing novel SARMs that preferentially improve sexual function.”